Showing posts from October, 2005
Show All

Ian Brown at the Eden Sessions 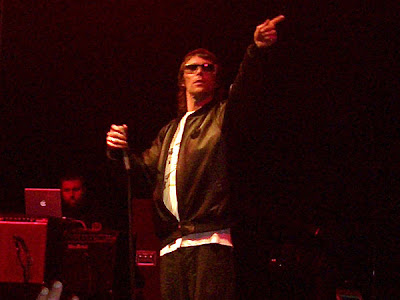 The Eden Sessions were again superb, a fantastic venue and relaxed atmosphere. A friend of mine went to see Basement Jaxx the night before Ian Brown played, and said that the crowd were perfect. Ian Brown was supported by Badly Drawn Boy and British Sea Power, and the whole evening was dedicated to a charity set up to help Kosovo. There was a young woman helping to raise awareness for the charity there, she had survived being shot 19 times. I had not heard British Sea Power before, and was not really engaged by them until their final number. A man dressed as a moth-eaten bear came onto the stage, whereupon the band started to beat him up, and each other; swapping instruments and generally making a complete mess of the stage. That certainly got my attention. I have both of their albums now. Badly Drawn Boy was excellent, but was playing to a crowd waiting for Ian Brown. This definitely affected his performance, but he still made the show for my wife and I. We saw him play at Eden
Post a comment
Read more